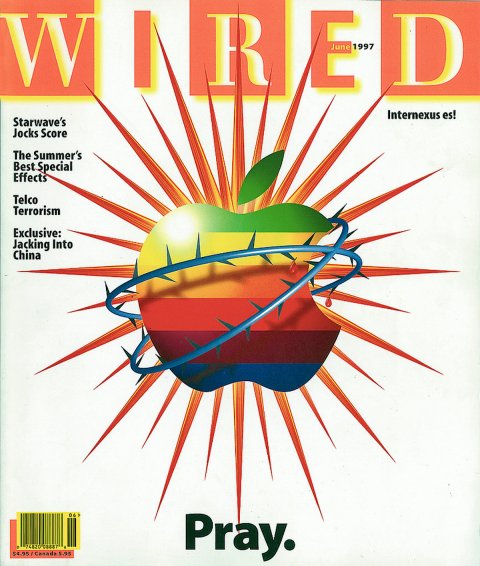 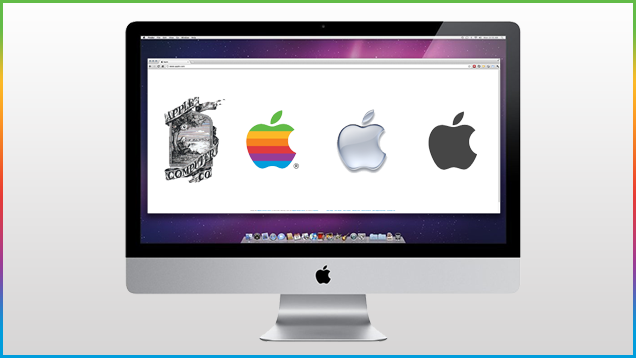 Following my recent introduction to a series of blog posts that tell the story of Underdogs that have inspired my life, this is the first story. I know this will no-doubt frustrate some people. While this particular underdog has a large fanbase, it also has a very vocal hate-group. But like it or not, this story is undeniably inspiring. It’s one of my personal favourite underdogs since it surrounds a field that I’m very familiar with, technology. The main turn-around took place in my lifetime and affected technology surrounded me as I grew up. It is, as you’re seen from the title, the story of Apple – and more specifically, it’s co-creator and eventual mastermind – Steve Jobs. 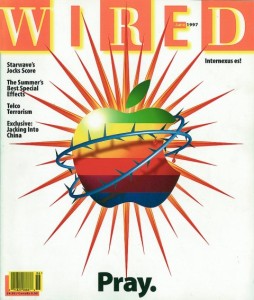 This week I read a recent Internet post that showcases a magazine article from 1997, titled “Pray” (Read the the original Internet Post here: All the things Wired got hilariously wrong in its legendary 1997 story on how to ‘save’ Apple).

The original magazine article features 101 suggestions on how to ‘save’ Apple. It’s not all bad, but a lot of the article’s suggestions are indeed hilariously miles-off the strategy that would eventually lead Apple to become one of the top 2 technology companies in the world (in 2014, beaten only by Samsung due to their larger appliance developments).

The majority of Apple’s success can undoubtedly be accredited to the face of Apple (until his passing in 2011): Steve Jobs. His story runs parallel to much of Apple’s underdog-to-topdog story. Without going into numerous dates and a detailed history (which can be found here: A Brief History of Apple); it’s safe to say that Apple had it’s fair share of ups and downs. One of which resulting in Steve Jobs’ being stripped of all contribution towards the technologies and eventually his resignation in 1985. At the hands of other members of the company at the time, they made many decisions to conform to the status-quo as an attempt to compete with other thriving technology companies of the day. This course of events would send Apple into a spiralling mess and by 1997, it seemed as though it could never recover from what it had become: a less-successful, more expensive computer company…

Understandably, from the outside, Apple looked as though it was down and nearly out. That’s when articles like the one mentioned earlier started to surface as they all jumped onto the bandwagon to accept Apple’s fate. At this point in 1997, the current CEO resigned and Steve Jobs stepped back into the role. I can’t imagine the intensity of the pressure, the criticism and the ‘watchful eyes’ of the board of directors, but against all odds the man who was once forced to resign from Apple turned it around. His legacy today is phenomenal.

While being told to stop focusing on hardware and software, bring down the prices, stop worrying about independence, conform to a DOS operating system and do so much more – Jobs took the company from strength to strength. Pioneering one of the only technology companies to exclusively produce hardware and software together. Apple, under his management went on to produce products of huge desirability including the iPod, iPhone, iPad alongside the laptops and computers they were already creating.

Now, since his passing, the Apple brand continues to grow. Perhaps not as fast and as solidly as it did under the Steve Jobs’ era – but it is still an undeniable success story of an underdog who didn’t listen and didn’t give up. 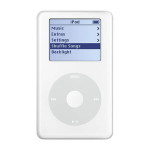 I wasn’t always on Apple’s side, growing up. Unable to afford a Mac, the first bit of Apple I ever experienced a 4th generation iPod which cost me all of three months’ wages from my part time job. By the time I reached university, I was able to afford my first MacBook laptop and since then, I haven’t looked back. I’m proud to use Apple products and here’s why… It’s not just because they look, act and feel great but because of the incredible heritage it represents. And underdog to a MASSIVE topdog. Well done Steve.