The absence of colour and the presence of all colour.

Through all that had been through, it seemed as though the “labyrinth” had all been a vicious dream that had used events past, present and future to lead me onto a path I otherwise would not have taken. It had occurred to me on numerous occasions throughout my journey that I would never reach the end of it – and yet somehow I found myself in the middle of this maze. It wasn’t as if I had just arrived there all of a sudden. I had been through many obstacles and enemies throughout my time here. But now, at the centre of it all, it felt a little sad that the end was in sight. The only thing that had escaped my memory was the Minotaur beast. He hadn’t shown his face for a while. But that was inevitably about to change. 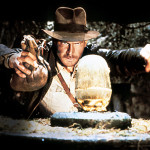 I had battled through Red, Orange, Magenta and even Blue themed events without him showing his face. But, as I moved towards the centre of the circular centre of the labyrinth, there was an Indiana-Jones-type rock pillar that reached stomach height. On it lay a stone model of the beast. This was it? A model? Barely a lego replica. In fact, had it of been Lego, it would have made it more worthwhile. It was hardly worth taking, it looked tacky and useless. It was the sort of thing that I’d have turned down even if someone had paid me to take it off them. 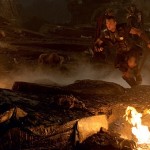 While I was examining the small statue, I was startled by some commotion from the corridor I’d arrived through. Suddenly a firey explosion filled the opening and someone dived out of the flames. The smell of smouldering clothes slowly made it to my direction of the room. As I made a first step towards to poor wounded person, I noticed the biggest, most ugliest beast I had ever seen. It stormed through the flames and roared as it saw it’s next meal. The burning human at it’s feet.

My first reaction was to run away, but feeling compassionate towards the hurting stranger on the floor I yelled at the beast. As it turned to focus on me, a number of things happened:

Firstly, I realised the beast was the minotaur but hugely multiplied in size (probably on steroids). The second thing that coincided with that revelation- I stumbled back and knocked the stone pillar holding the miniature statue. The statue fell to the floor and rolled away. But don’t worry too much. It’s not like it was anything decent to look at in the first place. A few scratches couldn’t hurt its appearance. A giant turd on its head couldn’t hurt its appearance… But back to it, somewhere in the commotion I flet a mixture of reasoning in my head.

Somewhere between panicing, trying to keep the beast “happy” and my memory from the Indiana Jones moment, I leaned to pick up the statue to put it back on its resting place. I reached for it in a manor that anyone would when there was a giant dinosaur looking at you, slowly. As I neared touching the small figure, the stranger yelled over at me. I didn’t work out what he’d said until it was too late. As I placed the statue back on the pillar, the echoe reached me: “Don’t pick it up…!”

Still in that moment, puzzled, I looked at the guy on the floor and instantly recognised the voice, look and general feel of the guy – it was me. Sure, he was wearing a different set of clothes and he seemed like he was completely exhausted – but it was definitely me.

Before I could give it a second thought, an invisible force threw me against the nearest wall. Being central to the room, the nearest wall was a good few metres away. So needless to say, my back did not appreciate such aerobics. As I fell from the height at which I was pinned to the dusty floor, I looked around to try and see this “force” that had shifted me. Not so much as coloured vapour. As my eyes began to catch focus of the moment, I realised that the force had shifted me just in time. The giant beast had paraded itself in a boisterous manor to my original position and was currently filling it with flames that it appeared to be producing from its stomach.

The fire seemed to be the only light in the labyrinth and yet the light continued to get dimmer and dimmer. It was like all the hope of escape was leaving me. Suddenly I had an overwhelming feeling that there was no point in fighting these visible and invisible forces that seemed to want to destroy me and the other me.

The strangeness of the last few adventures could not have prepared me the way this story had unraveled. I stumbled to me feet, dusted myself off and, with the little inner and outer strength I had in me, started to head towards the “other me”. If we were going to loose this battle, we may as well loose it together. All I needed was to finish this journey and return to my “normal” life.

With a last pat of my trousers, to get the dust off, I blacked out.

I looked up to a new scene.

I wasn’t in the labyrinth anymore. In fact I was somewhere completely different. I was at a place that I’d never seen before. The ground was stone, but it just continued for as far as the eye could see to the North, East and West. But to the South, a ledge that looked down on a mass-swirl of clouds. The clouds glowed with a set of sunrise colours that just continued to get brighter and brighter. I wanted to reach out and touch them – but the sheer height of the cliff, platform or rock that I was positioned on caused me to stay a safe distance from the edge. The thought that I had made it to some after-life experience had not escaped me, but that didn’t help me in the now – what do I do in the NOW?

The silence was eery and the fact that I was the only man around became suddenly apparent to me. There was only a wilderness of nothing to one direction and a drop, to which I could not see the bottom in the other direction.

I did what anyone who perceived themselves to be dreaming would do to wake themselves up. I jumped. In the hope that the fall would wake me.