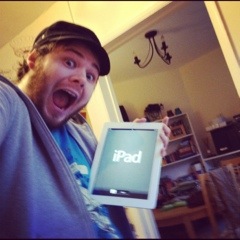 It took three releases and a well-paid job from a God-send client, but in 2012 I finally jumped into the iPad ladder. The third generation iPad had been rumoured for some time before its press release on March 7th, which gave me plenty of time to save up and then order the dream-machine the night of Apples announcement.

I’m pretty pro Apple, if I’m honest- but I can also be objective, so I thought I’d share my early experiences of this machine in case anyone was interested…

First off, I should point out that this is my first iPad, not an upgrade or seasonal re-investment and so a lot of the novelty comes from just a general iPad, not necessarily the fact that it’s a third gen version. Furthermore, it’s my first tablet. So we could say part of the novelty is a tablet in general. Let me explain…

Let’s talk the practicality of tablets in general for a second. On release day of iPad one, I was mildly skeptical of this “giant iPhone”, but three years later, I am utterly convinced tablets are the way forward. Has media convinced me? Possibly. But primarily the thing that has convinced me is the sheer volume of extremely useful applications. For example, I’m blogging from my pad now, using the WordPress application. I was able to speak publicly on Sunday night from Pages (Apples word processing app – more on that later) and Wednesday, I was able to show people a presentation through AirPlay to my HD tv (apple tv box required). That’s not to mention the emails, web browsing, social networking, photo editing, music playing, HD video watching and streaming and (obviously) gaming capacity of a tablet. Frankly it’s revolutionised the way I interact with media.

Not to mention the size. When you think of the size of the iPad, and the fact it essentially is a fanless, cordless, accessory-free laptop. It suddenly starts to become more impressive. I should point out, if you wouldn’t use a laptop, you wouldn’t use a tablet in most cases. And if you were getting a laptop to run specialist software, then a pad may not be the right move. But in all other scenarios, I would generally urge people to consider what you can do on a laptop that you can’t on a tablet. You may be surprised what you conclude.

Some of those apps and featured are Apple specific and some aren’t. So let’s talk why i chose iPad. It’s no secret that I’m quite the Apple fan, but I wasn’t always that way. In fact I was quite anti-Apple growing up. It was I only the beauty of the iPod coupled with the appalling Microsoft release: Vista, that persuaded me to change. But honestly, when you give it a chance it does work for you. But enough about personal opinion, what about spec.

Well, when I chose to go iPad, the third generation iPad hadn’t been announced yet, so I made my decision based on the iPad 2. And frankly, the others (such as the Galaxy tab) just didn’t compare in look, feel or capacity. Apple weren’t the first to produce a tablet computer but they had certainly brought it back into the forefront of people’s minds. That’s probably why when people think tablet, they think iPad. 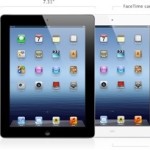 So why the third generation pad over the iPad 2?
Put bluntly, the display is everything.

When you are dealing with a device that is completely a screen and nothing more, I expect that screen to be good. And in the third generation iPad, it’s more than good. It’s literally breath-taking. To compare, it’s literally like looking at real life. Or a real book. E-ink in devices such as the kindle were fantastic, and still are, but even they pale in comparison. It’s like having a back-lit magazine.

Slowly but surely the apps are catching up with the iPads new display. The latest release from angry birds (Angry Birds Space) works beautifully on the new iPad, truly showing it off in colour, response and resolution.

But what about the other features of the new iPad? Well the back camera now records in full HD which means you can literally film, edit and publish a film from the comfort of your own tablet. The battery life is still excellent, which is a big deal considering the juice it ,use take up to power the display! The other really handy gadget is the voice dictate function on the keyboard. Handy to type on the go.

The other features I love about the iPad are the functionality of the iCloud, which really comes alive when you have an iPad, iPhone and a mac as your main machine. Syncing calendars, contacts, emails and notes is great, but now that you can do the same with documents (using Pages), presentations (using keynote) and spreadsheets (using Numbers), is a dream come true. It just makes life easier! I especially appreciate that I can take photos on my better-megapixel iPhone and then edit them on the higher-resolution iPad later using the photostream function. Brilliant.

Apple haters will no-doubt have either read this far to find evidence to fault this article and would have given up by now. What about the heat issue? I have felt nothing in mine. Sure it gets warm. But its a fan-less computer. But it doesn’t even get close to warmth a laptop does – and that has a fan! But here is the biggest two faults that I see with Apple (and therefore what I would perceive to be the reason Apple haters hate Apple).

1) The cost. There’s no denying that the most expensive device tablet or otherwise is an Apple device. Their prices are the same everywhere and they very rarely change the pricing structure. But you get what you pay for. The devices are beautiful, well-tested and sound. They produce the hardware and the software, minimising the likelihood of hackers and malware. Not only that, bu the experience that comes with it is second to none. From purchase through to trade-in, you are looked after. If the device had any fault over the first year, just take it into an Apple store and they’ll (more often than not) just give you a new one. Just like that.
And at the end of the day, if you buy a new HTC and want to sell you old one, you are lucky to get even half the money back. Apple phones and tablets maintain their value. Sometimes, with contract assistance you can even MAKE money by selling your old device back to O2 or equivalents.

2) Exclusivity in software. Compatibility is viewed as the biggest downfall for Apple. But a lot of it is just dated perception. Sure, back in the day, there was a major difference between Mac and PC, but these days I’m amazed at how much Microsoft are allowing for Mac. I’m not just talking about Office. But of late, Microsoft have been releasing good applications for iPad and iPhone. I’m really impressed by their 360′ panoramic software “Photosynth”, which other companies have been ripping off for the last 12 months. Not to mention the hotmail app and the likes. This goes for Google too, with their ever-changing Android operating system, it’s interesting to see that they still allow their apps to appear on Apple devices. Aside from that, once you have apple devices, you start to appreciate how handy the exclusivity of their own apps are!
I’m not denying the fact that you won’t be able to open your pad and run DOS and change all the settings on it. There are some obi ions limitations, but at the end of the day – how many of us actually use that stuff and how many just want the “freedom” there in case they ever need it. It’s like my VHS player. I like to have it, but I haven’t touched it in over two years now.

So in closing, what do I think about the new iPad? Well, I liken it to this.
Around ten years ago, I purchased my first ever laptop and my first ever mac. They were the same thing, a white MacBook. I still have and use that MacBook, but my iPad is my new MacBook. The new iPad just looks, feels and runs better. When it arrived, it was the same phenomenal feeling. The novelty hasn’t died off and the anticipation to its arrival was not even slightly over-rated. Honestly, I believe this device (and it’s future models) will gradually make the laptop obsolete. Bold statement, but I think we’re already starting to see it happen.