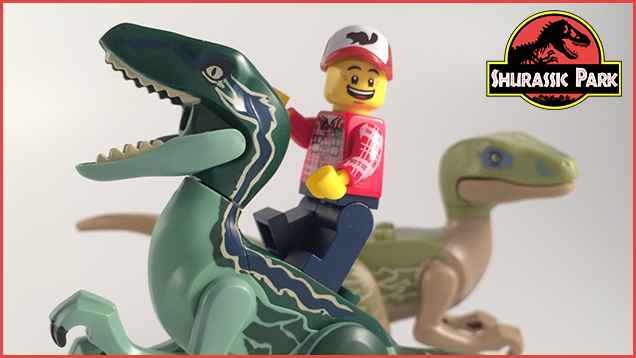 (Firstly – how cool are the LEGO raptors? Love them!)

Ah dinosaurs. I have loved them since before I could read. Museums and books were barely enough to feed my passion for dinosaurs as a child. Before the Internet came along, the only other media was of course film and tv. Needless to say, prior to the Lion King era – The Land Before Time was my most favourite film of all time. Any TV documentaries or dramas featuring dinosaurs were instant highlights for me.

While lying somewhat dormant in my more recent life, the love for Dinosaurs is still there and the recent film release of Jurassic World has only fanned the flame. I’d forgotten how great they are. The fact that this phenomenal animal type has completely disappeared from the planet (certainly appearing so, anyway…). All that remains are a few clues to their existence. As if the mystery element wasn’t exciting enough – the sheer beauty of these creatures makes this the most fascinating part of history for me. Or pre-history. However you want to look at it…

Sure, the ancient civilisations were fascinating and people tell me that England’s rich historic heritage is just as elaborate. But, in reality, how can any human civilisation possibly compete with spectacular animals larger than houses or tower-blocks?

Now, I don’t want to get caught up in the evolution/creation debate, but the fact is that I believe dinosaurs existed in the time era as humans did. And hey – before you scoff – I’m entitled to my views. But even if you don’t believe that, just for a moment, imagine. Imagine what it would have been like to have walked by a Diplodocus on the way to work. Or competing for lunch with a Deinonychus. Sounds like a dream to me. A pet Raptor would do me fine. Not sure our dog would be too impressed though.

Oh but let’s quickly talk about the biggest flaw in the Jurassic Park franchise (which I am more than happy to overlook for such an awesome bunch of movies): Velociraptor. As a keen dinosaur fan, I was always puzzled by JP’s depiction of the Velociraptor – it seemed to be an exact likeness to Deinonychus – a dinosaur which I had always loved growing up. After a bit of research, I confirmed that the Raptors we see in the films are in fact Deinonychus and not Velociraptors. Velociraptors are a lot smaller and didn’t have quite as sticky-up claws on their feet. That’s all the Deinonychus. But then again – that’s less easy for kids to say hen growing up. I managed though. Nevermind, I digress.

Back to the point – it’s funny, I heard that Pixar’s next big film takes the plot of ‘if the meteor that took out the dinosaurs missed Earth’ – and all the dinosaurs survived – with people. While I don’t agree with the initial cause – the end result will be similar to how I imagined it. People + Dinosaurs. It’s like an old-school Jurassic Park.

Speaking of which, I don’t really appreciate the delays in making Jurassic Park a reality. Come on scientists – all you need to do is find a fossilised mosquito, ensure it has dinosaur blood, extract it, get all DNA on it, hatch a dinosaur and boom – Dinosaur. Seriously, though. If only.