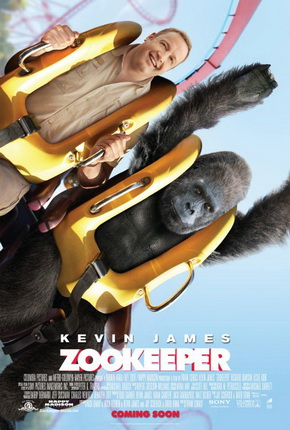 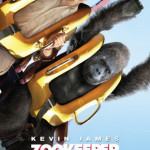 Ever since King of Queens, I’ve been a fan of the big guy (Kevin James). This film appealed to me on a few levels: Kevin, Talking Animals and Comedy (when a film has Kevin James and Talking Animals – it would be hard to pitch it as anything other than a comedy!). And I admit, I was entertained. But it is a kids film.

There are classic moments, and many that resembled that of Night at the Museum (especially the monkey). But I felt it was a bit of a poor plot. I’d buy into the zoo closing down or an animal getting put down to make the species break their silence after many millennia, but just because a guy is bad with women? Don’t think a gorilla would break its silence for that (unless it was Planet of the Apes). So on that level, a little disappointed.

However, there were a few classic moments that gave the more-than-half-empty cinema a good old chuckle. A Gorilla on a roller coaster was not one of them though (mis-advertising I think).

However, it’s a feel-good movie that gets you a talking lion and dieting elephant, so it’s worth a watch. It’s no Night at the Museum 3 though. It didn’t quite make it to three stars in my opinion. ★★☆☆☆