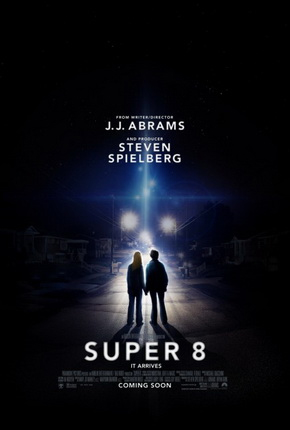 Set in 1979 in a fictional town called Lillian, the film is centered around a group of adventurous kids (modern Goonies?) making a film using a Super 8 camera.

Without spoiling any of the story, I will stick to the stuff that is given away in the trailer.

Whilst filming a night-scene at the towns station, a real life train crashes around the young film-crew and they capture the event on film – which later proves to be evidence that something else is going on.

What I like about it – the fact that I was entertained in one way or another throughout every moment of this film.

What I disliked about it – it didn’t receive as much publicity as it deserved.

To be honest, it’s been a while since I have seen a film that I have enjoyed from start to finish, but this film did hit the mark. With the general feel and emotion behind this film really does make it a classic in my eyes. It would earn itself five stars, except it’s the sort of film that is incredible for the first time, but wouldn’t have quite the same effect on a second time around. However, I’d still give it a well-earned 4 out of 5. ★★★★☆

Thank-you J.J. Abrams and Steven Spielberg for delivering on this piece.