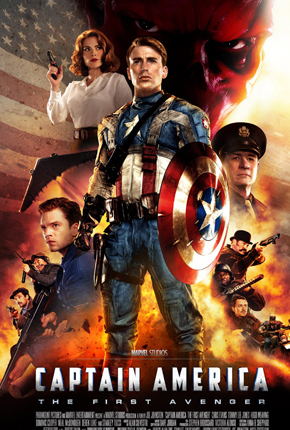 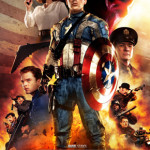 The film, set in 1942, adds a really nice twist to the modern Marvel/Super-Hero films of late and actually achieves the era-change very well. With elements of WW2 throughout the plot, it added some nice depth to the storyline. Equally the villain, Johann Schmidt was a brilliant and fascinating plot-base. Unfortunately, the villain isn’t the main character in this film and while, ironically, this superhero shares my first name – I felt he a weaker character of the Avengers and the Marvel universe. But that is not this film’s downfall.

I think if you were a patriotic American, this film would appeal a lot more to you. Although there are some intensely cheesy moments throughout the movie, it is an entertaining watch. Above anything else, the title gives away a little nugget of what lies beneath the surface of this film…

Post credits, we get the usual Marvel easter egg. This time it’s a full trailer for The Avengers film – set for release in May 2012. Frankly, go see the film for this alone.

For a film, would I like to have seen more from this? Yes. But in the larger spectrum of the Marvel Unison that is around the corner, I see this film as a welcome, albeit slightly sideline, addition to the Marvel Franchise. A steady three out of five. ★★★☆☆