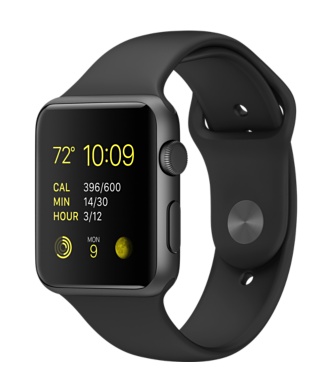 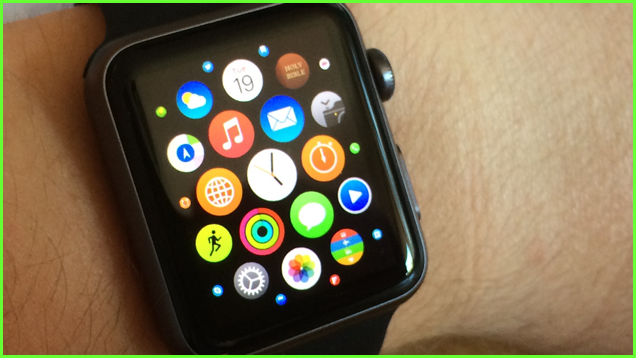 Thursday 14th May saw the notification that every keen Apple fan is hanging-on-a-thread for: “your order has been shipped!”. So late Friday, I was united with my brand new Apple Watch Sport 42mm Space Grey. Most of Friday involved me waiting at the window with my ever-expectant pet dog awaiting the UPS delivery van. Once it had arrived, I had so much work to catch up on that I didn’t even get to open the package until later that evening.

But when I did, oh wow. The sheer joy! So this post is my first month with an Apple Watch. It will be a fair review – I promise. But if you’re hoping that this review will conclude it’s a needless accessory, you may want to stop reading, because spoiler alert, my conclusion doesn’t end that way.

I’ll skip over the beautiful packaging, phenomenal accessories and Apple smells when you open the box and dive straight in with a review of the Sports Band… 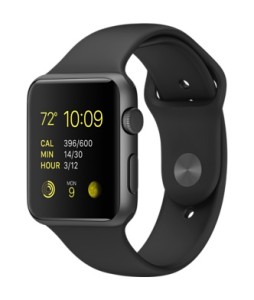 I went for the Space Grey Watch with black Sport Band. Opening it and putting it on, you really can feel the smooth quality rubber effect of the band. The first hurdle here is unquestionably the actual putting-it-on. The lath mechanism is slightly unusual but it soon becomes second nature. Following the guide helps, they explain that you put the pin through first, then tuck the band under. Classic Casio watches were a primitive version of this – but this still took a bit of fiddling to get right the first time, but it soon made sense with a really nice fit to even my oddly-shaped wrist. A month in, I can do it with my eyes half shut first thing in the morning.

The rubber was extremely comfortable with a soft-finish and yet still maintained the Apple quality that flows through its products. I can’t comment on the other straps, but considering this was the lowest price strap – I have been extremely impressed with it and would imagine the others boast a similar quality. That said, from my perspective, I’d be daring enough to suggest it may even be one of the best (if not the best!) strap available.

I confess it’s been while since I have worn an actual watch. My last few years saw me wearing a Nike Fuelband, but that was ore of a bracelet than a watch. So to go back to my Casio-wearing school days has taken a bit of getting used to. But here’s the thing. My old Casio’s were waterproof, which meant that when I wash, I’d often do the same to watch and strap. Keep it clean, stop the smelly build-up. Apple say you can do the same. Tim Cook proudly explains he wears his in the shower. And that’s all very well for a £10 Casio or if you happen to own Apple inc. If Tim’s watch steams up in the shower, he’ll have a new one delivered by helicopter before he’s even finished with his towel. For someone who can barely afford the Sports Watch – I’m a little more careful. That said, I rinse it (as if I’m holding a motion sensitive bomb) under a tap every other day to keep it looking fresh.

Apple Watch Sport
Since its announcement in September of 2014, I always had my eye on the Apple Watch Sport. Perhaps the bright colours (even though I went for black in the end anyway!), or the sport-brand icons that it matched – I was keen to make this my Apple Watch. So when it turned out to be the cheapest option, I was quite relieved. I have to say, there is nothing about this product that suggests it being a ‘basic’ or ‘entry-level’ model. If anything it does emit a sense of class, comfort and ease for every-day usage.

Usage
I think if anyone is looking for a new toy for their arm, they are probably best buying an armstrap for their iPhone – because the Apple Watch serves two main purposes: A Watch and a communication device. It’s not meant for much else, and so with that in mind – it lives up to the hype. If you are expecting it to be anything more than an extension of your iPhone, you may be disappointed. If, however, you are looking for a device to subtly pass on notifications, take brief calls or add items to your shopping list hands free – then the Apple Watch is perfect.

Arriving nearly a month after its actual release date, I had plenty of time to download apps for my watch – in preparation for my actual watch to be delivered. Once it did arrive, and I loaded them on – within 24 hours, I could already tell the apps that would be quickly deleted. Some of the more gimmickey apps have tried to do too much with the watch, resulting in a poor interface and a slow processing speed. That said, the native apps on the watch (the ones released by Apple) work brilliantly – with only one noticeable app missing: reminders (more on that later).

Texts, calls, notifications, adding to your reminders and everything in between works seamlessly with your phone and iCloud accounts. I’ve heard people ask why you would need these features, and the truth is – it’s just convenient. Instead of taking your phone out, unlocking it, opening the right app and typing away – you can just raise your wrist and ask Siri to take care of it for you. Great while holding a baby or walking a dog.

Siri
Since it’s release, Siri has been getting cleverer year by year. Initially, a simple request to direct you home would bring back the dictionary definition of a poodle. But now a lot smarter, Siri can take care of a lot more. But I would say that the Siri on the watch is somewhat better than even that on the iPhone. Whereas I’d find myself repeating two or three times on the phone, I am yet to experience Siri getting it wrong on the watch. This is handy because you will inevitably rely on it a lot more.

With no keyboard, the only way to reply to a text without set-phrases or emotions is to dictate a response. Similarly, to save time when trying to access an app, it’s just easier to ask Siri to sort it. It takes a bit of a leap to lean on Siri so much – but it really does start to work once you do.

Notifications
If you’re looking for a watch that will vibrate your arm off your desk while you work – the Apple Watch isn’t for you. The description of a ‘tap’ to notify you is accurate. Subtle enough to be silent, but strong enough to let you know something is happening.

The biggest task when setting up the Watch is undoubtedly sorting through the notifications. While you may be happy to be notified when Stephen Fry tweets something on your phone – it may get a bit tiresome being tapped on the wrist every time he does. Luckily the watch app on the iPhone gives complete control over this, allowing you to mirror app notifications from the phone or have unique settings on an app-by-app basis. 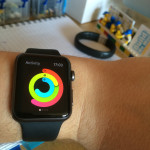 Moving on from my beloved Nike Fuelband, I was asking a lot from the Apple Watch to fill the void the Fuelband left. The Fuelband would measure my activity throughout the day and give my an analysis at the end of each day. The Apple Watch goes over and above on this. I was thrilled at the results. It breaks your activity down into three sections: Movement, Exercise and Standing. Movement being general movement in calroies, set to an amount of your choosing. Exercise being the amount of the expected 30 minutes per day of highly elevated hear-rate (that’s right, the watch actually measures this!) and the Standing goal is ensuring you stand for a few minutes for at least 12 hours of your day.

Limitations
There are some limitations to the watch that I imagine will be resolved in software updates and/or future models. The most talked about one is the security of the watch. Its heavily reliance on the phone does mean that the watch can easily be removed from the wrist and whizzed away somewhere with no means to track its whereabouts. Even a passcode once it leaves the skin can still be wiped in a factory reset. Rumour has it that Apple will release a method for countering this issue at tomorrow’s WWDC, but we shall see. The way I see it, if you have a subtle enough design (like the black Sports Watch) – it looks like a normal watch anyway so someone would have to be following you for a while to even work out that its an Apple watch. And if people are following you around for ages without you realising – you have bigger problems to worry about!

Watch faces aren’t as customisable as I would have perhaps liked – vaguely reminiscent of the early iOS operating systems that didn’t allow photo backgrounds and lockscreens. I’m sure this will be changed or ‘added’ a little ways down the road. I already mentioned that the native Apple ‘reminders’ app is missing for some reason from the watch – but again I hear that something is coming in the future. And in the meantime, you can still call for or add to reminders using Siri on your watch.

Speed. The watch isn’t slow – but my phone is. I’m running a filled-to-capacity iPhone 5s which is slow and buggy at the best of times due to two years of solid use. The consequence is that often requests on my watch get held up because of my phone. That said, I am impressed with the connectivity between though in spite of this.

Battery
One of the bigger criticisms of Apple products is battery life. But this really isn’t something I have found with the watch. I take phone calls, measure exercise regularly, play on various apps and dismiss lots of notifications every day and yet still I haven’t put it on charge with anything less than 20% battery remaining.

It does drain the iPhone battery a bit more, but since I tend to unlock it less, it balances out nicely. I imagine the iPhone 6 and later wouldn’t have the same battery drain that my 5S has anyway. 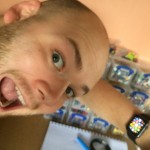 I am so happy with my watch, it makes total sense to me. There’s so much more I could discuss and maybe I will at some point. But in short – it feels so exciting to have technology with me, to be able to add to my shopping list while I’m raiding my cupboards or take phone calls hands-free while I’m eating the raided snacks.

All in all though, if you like Apple and technology, you will love the Apple Watch. It’s a great bit of kit and an excellent extension to the connectivity between devices.

I’ve never understood expensive watches for expensive sake. Rolex’s etc just never appealed to me because, quite simply, they just tell the time (and to me personally, they don’t even look that great). I know, I know, it gives a certain ‘image’ to people. But frankly, the only image I get from them is condensation. Perhaps if you’re into that sort of thing you should go for the bling bling $8,000 Apple Watch Edition. Even I think that one’s a bit of a joke. This watch, however, makes a lot more sense to me from a visual and productive sense. It looks and feels great but is already highly useful. I doubted I’d ever come back to wearing a watch – but I was very wrong. Great job Apple, I like.