I have no shame in announcing that if you are an Apple hater, this blog is once again going to drive you up the iWall. But I will try and explain the main incentives and disadvantages to the new iPhone, the iPhone5.

It’s now been about 20 hours since my new phone arrived in the post. It’s safe to say I was especially pleased to see the delivery man when he did arrive. To which his response was “*%#*!# iPhone, I have a thousand of these to get through”. Obviously not some people’s cup of tea. I thought about asking him if he’d pre-ordered one, but concluded I probably shouldn’t push him over the edge.

Either way, there is no denying that the time between the pre-order and the delivery for Apple products, a tad of doubt slips in. That’s pretty pricey… maybe it’s not that different to the last one… should I have really gone for a white one…? But. In a moment. When you open that box, all doubt is brushed away. The second you hold the #iphone5, you realise it is a million times better than the last one. Why? Well, I will do my best to explain- but to truly know, you’ll need to go into Apple and hold one yourself. You’ll instantly know what I mean.

The first difference is the weight. Now for me, a device that is too light will often feel cheap and brittle. Not so with the #iPhone5. It may partly be the quality of the metal plate on the back or the screen on the front, but even though this phone is INSANELY light (very noticeable if you are upgrading from an old iPhone), it doesn’t feel cheap or fragile in any way. Far from it, it feels like you’re holding a shard of “future”.

But it gets better. The additional screen space initially sounded a bit of a weak development. I mean it’s just a bit taller, right? I was oh-so-wrong. That extra space makes the WORLD of difference. Texting, reading emails, reading tweets, even playing games (the ones that have updated their apps!) is better. It’s just a clearer experience. I had a go on my old 4s before saying goodbye to it yesterday, and I couldn’t believe how tight the screen was. I’m not exaggerating. 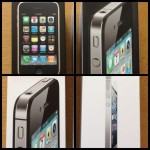 Oh the thin-ness. It’s so thin. I cannot believe how a device this good is so thin. It’s simply beautiful. And while we’re on that subject, lets talk colour. Black/slate or White/silver. Well I guess it’s down to preference really. I have always got a black phone. Every time. So this time, I had figured I would go white even before it had even been announced. Then, when it was announced, I was mildly skeptical – simply because of how manly the black ones looked. But I stuck to my original plan and I am glad I did. The white one is absolutely stunning. Now, having seen it, I would never have chosen the black. But, of course, it’s down to personal preference. I would say this much: rumors are floating around the Internet that the black slate scratches easily. But I’d read up on that if I were you, it could just be chavs who store their iPhones in the same pocket as their knives.

Ok let’s talk drawbacks to the #iPhone5, lets try and be a little bit objective. The first drawback is the lightening connector. I have to say, it looks amazing, charges fast and is a handy little connector. But, if course, it’s useless with all my old accessories. Plus the adaptor isn’t released until October. Which leaves me with a single charger until then. That said, this is the same as when Nokia ditched the big power connector with the little one. The only difference is that Nokia didn’t charge £30 for the adapter. The truth here is that Apple have kept their larger connector for around 6 years now, so if we can assume the same for the lightening connector, I’m happy to make the sacrifice. At the very least, it equates to bigger speakers on the bottom of the phone.

Other draw-backs people may not appreciate (although they haven’t bothered me yet): the side-ways keyboard is obviously a lot longer, making it marginally harder to type like that. But I’m a portrait typer myself. Also some of the third party apps, like Instagram, haven’t update their screen ratio’s yet. This means the apps open in the centre of the screen with borders at the top and bottom. That said, apps are updating at an extremely fast rate. I’m using the WordPress app to type this and that was updated before I even got the phone.

Also, 4G is somewhat scarce here in the UK. There are rumours and stories of it being in various cities for various networks, but having spoken with O2, they aren’t expecting it nationwide until April 2013. That means if you are getting it for the 4G, you may have to wait awhile. But that’s ok with me. I figure it will be worth the wait (right?).

The phone is naturally taller, but not as tall as I’d feared. it still fits nicely in my pocket and hand. And when you see how fantastic a big screen is, you quickly accommodate to the size change. Finally, the only other minor issue may be the earpod headphones. The sound is phenomenal. Faultless, I would say. But they feel very strange in my ears. I think I have strange ears though, so this could be a Sholdstock exclusive problem. But I have started to get used to them. I mean come on, it’s only been 20 hours. And it’s not like I’ve had them in for even a tenth of that… yet.

Honestly, the bottom line is that you will need to feel one to know. But there is such a logical feel to the #iPhone5, it just fits. And to me, it’s the most beautiful bit of tech I own.