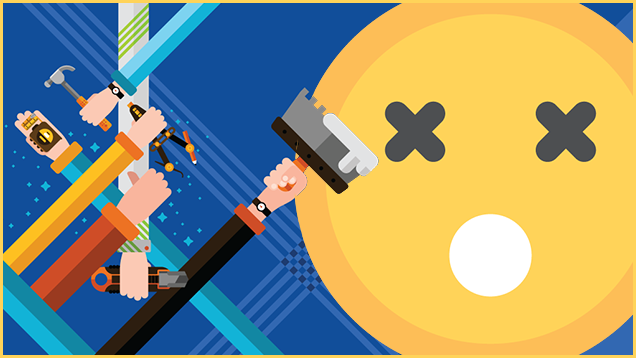 I hear it said that one of the most important traits for any father is to have a handy set of DIY tools and know how to use them. Throughout the eight years or so of living away from home, I have slowly accumulated a selection of tools in varying degrees of quality and decency – none of which do I know how to use properly. Perhaps the tape measure – but even that seems to give me evils while uttering ‘You don’t know how to use me, don’t pretend you know. Go get a professional’. So I get a sneaky feeling I’m doing something wrong.

It’s true that my heritage has many positive things – but DIY certainly isn’t one of them. In fact, the best bit of DIY training that I received came from my late Grandpa. A source, which sadly no longer is available to me. This is certainly no criticism of my parents, who have taught me many (far more) useful things in my prepubescent years. However, it does leave me in an interesting situation when it comes to DIY around my family home. So much so, in fact, that it has quickly become a joke among my wife and kid(s, eventually I would imagine)…

Take, for example, the classic Ikea flat-pack. Something that we still rely on to furnish our entire house (heck there’s no other way we could afford furniture!!). Now, I realise these are straight-forward kits – designed for the everyday-person. But I’m not convinced I was who they had in mind when they compiled their everyday-instructions. In fact, I suspect they were more aiming more towards someone who know which end of the hammer to hold. I mean aside from the pictures being in black-and-white (come on guys, it’s 2016), the basic outline pictures often lead me to build a unit up to three or four times before actually getting it right. But not without adding a handful of holes in the wrong place on the unit and/or my body.

And then there is the epic mountain of a challenge: the wall-hanging situation. Am I the only person who finds it impossible to drill into walls? I mean I have myself a drill. I’ve got some drill bits (apparently that is the actual technical term for the fancy ends to a drill – who knew?). I followed a YouTube tutorial and yet still, I drilled in about as far as a push pin would have got. Which is ironic because a push pin is probably a more secure wall-fixture than the sorry attempts I have made.

But that’s usually fine (and also the reason I wait to do these tasks when the rest of the family is out of the house), but now that my oldest daughter is a toddler and my second won’t be far behind – it’s time to b any-proof the house.

All of my (non)DIY knowledge had been building to this moment. Building towards this once-in-a-lifetime chance to show my family I can do man-stuff. Well I’m proud to inform that Internet that I did my best.

Drawers have been tabbed, cupboards have clasps and corners have rubber corner-things. Proud of my accomplishments, I stood back from my work late-afternoon after my daughter had gone to sleep. Tomorrow would be the test of whether the DIY holds up.

Daybreak. The sun had barely risen when my daughters morning giggles turned into ‘Daddadddaddda’ which symbolises my two-second notice that it’s time to see my princess for the first time that day. Not too long after, it was time for her to put my DIY skills to the test.

Needless to day my DIY heritage continues as she not only pulled the drawer tabs and corners but then also proceeded to pull apart the cupboard locks.

I like to put it down to my daughters intellect and intuitive nature – which clearly outmanoeuvred the safety equipment company. At least that’ the official line I will be telling my every-patient (and frankly, better DIY Skilled) wife.

Reality is probably closer to my abysmal DIY skills. But hey. I’m happy with that, we can’t all be good at everything. It just happens that my skills lie in the more techincal-and-artisy arena. My man pride remains in tact. I don’t care that guys are supposed to know this stuff. Who wrote the rule book on this one? So, whether I’m the only guy who feels this way, or maybe it is a somewhat hammer-shaped elephant in the metaphorical room, I’m saying it’s ok for guys to suck at DIY. Having said that… At least for now… Just nobody lean on any shelves when they come over to visit, yeah?