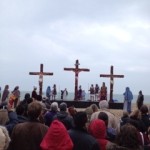 Easter Weekend. Happy Easter everyone. I had the privilege yesterday of visiting two Passion Plays across Brighton. Both very well done and both serving as fitting reminders of the story of Easter. Admittedly they both told the story in very different lights, one set in modern day and the other set in the traditional setting of Jesus’ time.

Heading up the live visuals for the modern play, whilst managing the website in the build-up to the classic Passion Play, I had reason to celebrate both. And they both were excellent. Unlike someone I spoke to who had also been to both, who’s first comments were to state a favourite and judge the other, I found the plays equally moving.

My reason for writing, however, is the thought behind Passion Plays.

For those of you who aren’t aware, Passion Plays are the reenactment of the story of Jesus – usually in the traditional setting. Passion Plays take place across the UK more than annually and are performed right around he world also. They often unite churches across a given city as they join to produce a play depicting the life, death and resurrection of Jesus. Understandably, Easter sees the most of these plays take place across the globe. But why? Why do we act out and watch a man being brutally murdered time and time again?

Is it to satisfy the childhood nativity-at-school memories of otherwise busy adults? Or to cause maximum controversy in public locations around the globe? Well there are probably a few very good answers to the purpose of Passion Plays, but one that really spoke to me through the plays yesterday was this: it puts me, the viewer, the onlooker, the crowd – smack, bang in the middle of the story. And unlike most plays, there is a very obvious link from the story to my life.

Pause for a second. I should point out that there are many reasons for a Passion Play. To bring up the topic of Jesus (it made me write this blog post!), for example, but this one was the one that spoke to me: 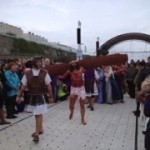 The truth is that for the first time, I found myself asking the question: “what would I have done in that scenario, who would I have been?” The question came to me at the moment Jesus was paraded in his broken and bloody state through the crowd. I stood there with my cameraphone, wanting to get the “best” photo of the moment. I realised I would have been doing that very thing if Jesus was being mugged and paraded today. Which really got me thinking! Truth be told, would I view him as the son of God or a mad man? And honestly, I have to say the answer wasn’t as obvious and instant as I’d liked to have thought it would have been.

We’re all so skeptical of everything that doesn’t fit the things we’re used to. And the truth is Jesus wouldn’t have fit the meek-and-mild mould quite the way we’d have imagined. He would have pushed us out of our comfort zones for the sake of those who are in need.

He focused on the needy, the sinners, the hurting. And I think we’d have questioned his motives and his actions. Well I fear I would have, anyway. So then I had to ask – why do I believe that which he said (and did). He is the pivotal point of my faith, the purpose of what I believe and the reason behind the positive things in my life.

When I place myself in the scene of Jesus’ trial, whipping, and ultimately brutal death. I could have had a hand in it. And yet STILL, his only words regarding their actions were “forgive them, they don’t know what they are doing”. I think this is love that no-one else could match. Perhaps some would call it insanity, but for me, I can’t see it as nothing except the ultimate self sacrifice. And then, when you pair it with his claim to be the son of God, I can’t help but cave in to his act of love.

I don’t expect everyone to come to the same conclusion. I don’t even have a problem with Easter eggs and Easter bunnies, but I do have to say that yesterday I was reminded how much Jesus loved me. He died, with me in mind. And I think that’s worth thanking him for.

Whether you believe he rose again, or even if he was the son of God. I have to say I do. And I also believe he hears my prayers, my heartbeats and even reads this blog. So even if this is just between me and him, I want him to know I’m thankful, grateful and I believe that his actions changed history forever.

The modern Passion Play took place at CityCoast Church, as part of the Easter on the Coast event. The play was titled “We are the Whitnesses”, written and directed by Israel Oyelumade. Jesus was played by a very convincing Faron Woodbridge. It was a visually spectacular performance. With humour, emotion and an ultimately heart-stopping conclusion.

The classic Passion Play took place on Brighton seafront, by Madeira Drive as part of the cross-churches event: Soul by the Sea. This classic Passion Play echoed across Brighton beach as Jesus’ life, death and resurrection were performed. The dull weather somehow added more emotion to the death and crucifixion scene which was truly moving. Jesus was played by James Burke-Dunsmore, who has played Jesus on stage to over 250,000 people.

Like I say, both plays we’re exceptional and every person involved in either should be both proud and satisfied with the events they worked towards. At the very least, they got me thinking. I wonder how many others came away thinking similarly. Yesterday completely confirmed for me that Passion Plays serve a fantastic purpose of reminding us and getting us to re-consider what Jesus went through for us. For more information on Passion Plays, visit passionplays.org for more information.