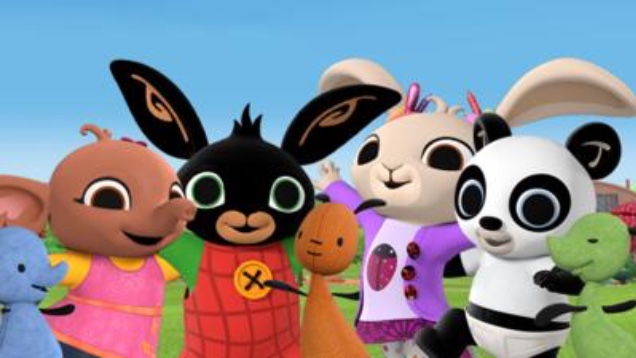 For those of you without kids, or have kids but don’t watch tv(!!?): Bing! is a 9 minute tv programme that runs daily on the BBC channel: Cebeebies. Unlike most of the garbage on these kids channels, I quickly grew to like Bing! – nearly as fast as my daughter did. In fact it’s one of the few tv shows that will relax her in the evenings…

Needless to say, we watch recordings of the show regularly which has enevitably lead to me looking for deeper meanings behind the show whilst my daughter innocently watches the same repeated episodes that we’ve purchased on iTunes.

Bing! is the story of a three-year-old bunny learning basic skills through stories with his friends and carers. I say carers because that’s part of the mystery of Bing!. Unlike most shows, Bing bunny appears to be adopted (along with his 4 friends) into a world of smaller rag-doll versions of regular animals. Sounds freaky? It’s really not. Bing’s carer, Flop, is actually incredibly cool.

Like Bing, his four friends (2 other bunnies, an elephant and a panda), have also been seemingly adopted or minded by rag-doll versions of themselves.

It’s led to some interesting theories online. Some say that as the animals grow, they turn into the rag-doll style animals. Some say that the rag dolls are imaginary. But I found those a tad inconsistent with a lot of the story plots and character interactions.

It dawned on me, watching an episode at 10pm while hoping my daughter drifted off, I think I may have a theory that does work. Albeit slightly far fetched. But then again, we’re talking about talking three year old animals dressed in clothes in a world where a baby elephant is the same size as baby bunny. So I guess this theory is as sound as the show is.

Here’s what I think. The show is based on an alternative planet, enhabited by these rag-doll creatures. This is supported by the fact that all architecture and foods are slightly more bubbly than Earth and also all other characters in the show are the rag-doll specie. It’s my thoughts that Bing and his friends somehow got stranded on this planet and were adopted by Flop and his friends who found the baby animals.

Perhaps not, but it’s a working theory that came to me at 10pm while I wait for my own baby to fall asleep. And while not being artistically perfect, it certainly does the job of entertaining my girl and me.