Teething Problems
Intelligent design aside, there are some clear downsides to the Switch which are evident from early on in the unwrapping process. There are a lot of bits. Not too much a problem, but coupled with the obvious and seemingly unnecessary rushed launch of the console, there are a lot of areas that can go wrong.

I ordred a black (grey) console on release day and was lucky enough to have my order fulfilled the next working day. Pre-orders and reservations now seem to have a longer waiting list. But it seems fair to say my console was at least one of the first batches. Perhaps that’s why the wall charger was completely dead upon arrival. Unlike previous consoles, this one is powered by the same USB-C that Apple have used to power their latest lines of MacBooks. This was a relief as it meant I can charge the device while I await a replacement. While the Apple cable charges the unit in portable mode, the dock for the TV requires the cable to be Nintendo specific, which wasn’t so helpful. As a result, I had to purchase a Nintendo power adapter until I hear back from them regarding the one that came with the console. And I have to say Nintendo’s customer service in this matter is pretty atrocious. I received email confirmation that they received my message nearly a week ago with no further contact. Scary. But that’s probably not surprising, because my consoles’ problem has probably come in at the bottom of the list of priorities for Nintendo. You see, I was lucky to have that problem in comparison to some of the other first-batch faults.

Reports are being posted online of left controllers not syncing, dead pixels across the portable screen and games not being read properly. And that’s pretty bad considering these are all standard features that the console boasts.

That all being said, assuming Nintendo actually do something about these problems – the rest is all positive.

The first click
It’s not a secret that I miss buttons. In an age where tough-screen is everything, I miss the feel of buttons beneath my fingers. Especially in gaming. I’m getting sick and tired of smart-phone games for two main reasons: 1. the controls don’t work for me – touch screen just isn’t precise enough. I like buttons. 2. it seems as though more than half of smart phone apps are freemium. Meaning, download for free (sometimes a small fee), then the developer milks the user for cash as they try desperately to make it through a game that is literally impossible without the input of real cash.

So. To have a console that has stand-alone games was a nice feeling again. Reminiscent to a pre-Wii era. Which is why the first setup of the Switch felt so right. Although the ability to ‘switch’ between portable and home theatre gaming would be considered the main gimmick, Nintendo have finally let go of some of their other crazier gimmicks. I didn’t need to configure my console by waving my hand around the screen like an ape (Nintendo Wii) or cross my eyes to the point of headaches to get a partially 3D image without the use of glasses (Nintendo 3DS). No, this seemed instantly like the return of sanity to the company’s headline device.

And the device does have motion sensors and touch screens, but neither are essential in the gaming and neither have been used as the selling point. In short, you can sit down and play the console without having to wave your arms about. It’s not trying to be anything its not. It’s a real console again.

Software
As I previously mentioned, I haven’t owned a new Nintendo device since the release of the Wii in 2006. It’s ability to connect to the Internet was partial at best. Requesting a complete reset of my Wifi system to even make it compatible. I don’t know if the WiiU was better. I don’t know if the DS product line improved the software either. But I do know that the Switch interface is slick and easy to navigate.

The only drawback is that we are essentially on Day 1 content. Do there are a handful of games to download from the store, but no entertainment apps or other features. Although Nintendo insist this will be introduced in a later update. Fair play. And it is, when their launch-day flagship game is Zelda: Breath of the Wild. I have been playing this game ever since and I am blown away by the graphics and game play. Again, it’s reminiscent of previous consoles before Nintendo decided to go all-wacky in the Wii days. Even the Zelda that was released alongside the Wii lacked the same ‘wow’ factor because no-one actually wanted to pretend they were using a bow and arrow rather than just press a button. But this time, it hits the mark. Game reviews are already agreeing this could well be the game of the year. And I understand why.

Hardware
I’ve already addressed the issues surrounding the first-batch consoles, which I hope will be resolved soon. Simply because this is a good console and I think it will stand the test of time far better than a lot of the other recent releases – not only from Nintendo – but competing console manufacturers. I know, I know. This is going to be hard to believe. But in terms of the gaming experience, I have already had far more fun on my Switch than I have had on any other console released in the last ten years. Big claims, I know. Remember when the Playstation PSP came out? It was fantastic. I know they have the Vita now which is apparently even better. But everyone knows, when you buy a mobile gaming game, it’s just a dialled down version of the real version on Xbox or PS4. But I feel like, for the first time, this isn’t the case for a mobile device. Based purely on Zelda, the only game I own admittedly, this device is really showing up the competition.

But is all of that worth the £279 price-tag. £328 if you factor in Zelda too. Well, I confess I didn’t even pay retail price for this. Thanks to a healthy helping of Tesco Clubcard vouchers, I was able to shave off the nasty sting of the console RRP. I think, though, yes it is worth it. But I also think, if you are going to spend that kind of money – it’s worth the wait for a few things: 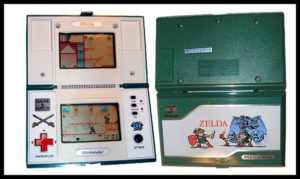 Part of me wants to hug Nintendo and thank them for FINALLY releasing a console I can get on board with. Their previous releases were getting worse and worse. But then part of me wants to slap them around the face and tell them to get their act together. They clearly rushed this product to launch which is a shame since it has SO much going for it. It seems such a shame that there will be so many negative reviews purely because of the lack of online content and software on the device and a few hardware glitches that could have been easily picked up with a bit more product testing.

But all in all, this is literally the homecoming for Nintendo and I cannot wait for the release of some Mario titles. Especially is this Zelda release is anything to go by. That game gets a 10/10 from me. And the console 9.5.

All in all, it seems only fitting the first game to be played on the newest Nintendo console is the same as the first one I ever played. The Zelda Game and Watch. Anyone have one of those (right)?