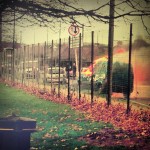 It’s not very often that you get to be a part of an amusing story but yesterday was an enjoyable exception.

We live in a nice area. When I say nice, I mean both neighbors are nice. Beyond them, I can’t be sure. In fact beyond that I’m pretty sure we’re talking shady teens, mopeds and sketchy builders who never wear t-shirts.

A little ways down the road yesterday my suspicions were confirmed in an explosive adventure.

3:30pm on a busy Friday, I am arriving home after various business-themed errands. Having been awake since the early hours and at work all day, I was looking forward to a final few hours of work before a night off. That’s when a set of blue-vanned morans sped past in a blue half-van.

First off there was pang. And by pang, I’m referring to a large pop/bang that was loud enough to make me do a double take. On the second take, I saw something you rarely see in real life. Two grown men diving from a van going at 30 miles an hour (probably a lot faster, though for their legal sake -if this ever gets found-I’ll stick with 30!). The van, driving away from me (driver-less, I should point out) sped down the road with smoke billowing from the front.

One of the men ran faster than the speed of light from the scene. Whether he was too wimpy to watch his beloved blue van die or whether he felt partly guilty, I don’t know. But either way the grown butchy builder ran as fast as his Adidas-fitted legs could carry him. I lost track of him, as the van was way more exciting. 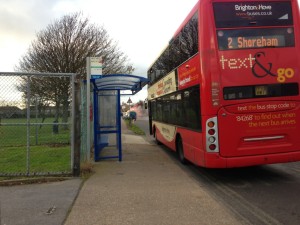 The second man braved the fire and ran at the speed of the car, managing to jerk the stirring wheel to the left, causing it to veer into a lamppost a bit further down the road. After this heroic act, he bolted like the wind. And all that was left was a blue van- that was now in flames. Fun.

After calling the fire brigade, I got as close to the scene as possible. Why? Photos and videos really. I’d got a perfect view of the burning van, when something changed dramatically for the worse. A bus arrived on the scene. Fearing the flames, the bus driver parked just short of the burning van and let the passengers off. The bus driver then jumped off the bus and sat at the bus stop, while the double-decker bus casually blocked everyone’s view of this exciting event. Buses. Always in the way. Thanks a bundle “Number 2 to Shoreham”.

Seeking a better view, I was able to stray into the park behind some fencing. To see how the van was holding up. Then then story began a new chapter. Fireworks. Apparently blue van drivers often transport fireworks. Flame flickers became gunpowder booms. Somehow I felt safe behind the wiry fence. That and the fact I was quite far back.

Chavs were gathering around the flaming vehicle, much like moths around a lightbulb or flies around… Well you know. Apparently burning vehicles attract them. But then again, it had me just as intrigued.

After a while, the fireworks seemed to subside, but the flames only grew taller resulting in the first of three large bangs as the tyres burst. Me, the bus driver and the heard or under-educated secondary school kids looked on with excitement, ready for the petrol tank to blow. Fortunately, the position of the van meant there was a park to the left, and a road to the right. But if it was my house opposite, I’d have probably been a lot less excited at the prospective explosion.

We waiting with eyes wide open for the giant explosion, which unfortunately never came. But as we looked on, we saw a black BMW convertible, slowly lip off the friendly civilians who had helped block the road. The young cocky BMW driver- you know the type- only in his twenties, more product in his hair than a gel factory and clearly compensating for something- pushed past everyone and tried to look like a hardnut.

Deep down, if we all admitted it, we’d have loved the van to explode just as he went passed. Sadly it did not. But once past the flames, the civilians the other end of the road and flames wouldn’t let him pass. To which we all laughed and cheered. That’ll teach him.

But anyway, since no-one was injured (or so I thought), I could look on with keenness and anticipation. It had been at least 20 minutes (or so it felt) before the first sirens were heard. First to arrive, the ambulance. Which was ironic, I thought, considering there were no victims. Or so I thought.

Suddenly out of the crowd of underage mums and rowdy teenagers came an aggressive and hate-filled splurge of statements. I won’t repeat them, but in short she yelled something along the lines of: You took forevaaah tu get ‘eree… Moi boyvrrend is burned all ovaah! Ef ‘e dies is your fault.

The tone changed dramatically as I feared someone was seriously hurt. Then from out behind the crowd, who should return, but run-away driver number 1. “Ere ee is- ‘elp ‘im” yelled the woman. I did a double take as the man pulled off his shirt tensed up and walked up to the ambulance, with what appeared to be a few minor scratches from his moving-car stunt. Everyone rolled there eyes and sympathy quickly switched from the “injured” man to the poor paramedics who would now have to deal with this over dramatic lunatic.

Everyone’s attention returned to the van, that was still burning. A further ten minutes passed and finally the police arrived, blocking the road just in time for the fire truck to arrive. The fire truck then had to wait for the police car to move before it could get anywhere near the burning van. Nothing like clear co-ordination and teamwork :p

Then the police told everyone to move away as “there were reports of fireworks on board”. Yeah, no kidding, we’d been watching them!!

From then the emergency services spent an hour or so tackling the inferno of the van before towing away the wreckage later that night.

Finally peace was restored to the road, until the next set of clever clogs decide to light fireworks in a moving vehicle.

And just to show that this is every bit as true as I say, here’s a little YouTube I made to celebrate the occasion. Enjoy.