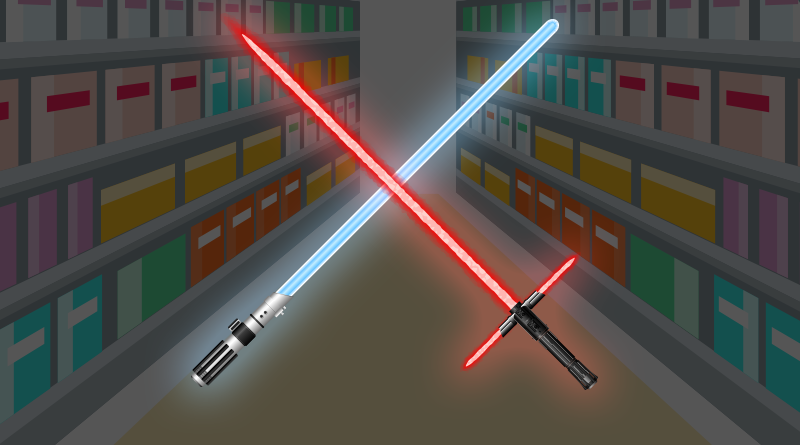 Shocking as it may sound, I actually do some of our grocery shopping at a shop and not through the Internet. Yep, that’s right. I actually leave the house to purchase food on occasions. And perhaps, even more surprisingly, my supermarket of choice is Lidl! Perhaps the stereotypes here fit, but I’m not too worried about appearance here. The food tastes really good and is insanely cheap. It’s brilliant. But less that a week ago, I had the most fun I’d had in the supermarket as I’d had in a while. You see, I was able to witness a fantastic battle of will, fury and speed. The age-old battle of customer vs staff.

To put you in the picture of where this story is coming from, in case you didn’t know, I was a Produce employee at a well-known supermarket chain that will remain nameless (rhymes is splainsburys). For eight years, I fought the good fight, providing customers with their fruit and veg. For the most part, it was a good job with reasonable pay surrounded by decent people. Staff and customers. But then there were those few of both that would ruin everyone’s day. Particularly upper-class customers who looked down upon the meer ‘supermarket hands’ as servants to their beck-and-call. And while I worked there, I tried to keep my mouth shut. After all, I didn’t want to loose my job. But now a free agent, I long for the scenario where a snotty-nosed customer takes it out on a staff member. You see, as an ‘innocent’ bystander, I can hurl whatever comments I want at the disgruntled customer. I can’t get the sack for that. Plus, the employees may even give me discounts to standing up for them. So it’s a win win. Needless to say, the opportunities where I am a onlooker to a Staff vs Customer show-down are few and far between. But when they do occur, I capitalise. And that, my friends, is where this story begins…

Somewhere between the watermelons and the pineapples, an irruption of noise bellowed across the tiled fruit section of the supermarket. “Oy!” the shrill outburst echoed around the already-busy supermarket aisle. The crowds parted, much like I imagine the Red Sea for the Exodus to walk through. Only this time, a far less glorious site paraded themselves down the divided onlookers. It was a staff member fighting back tears, chased by a 50-something year old grump of a woman who I can only liken to a character from Eastenders. Obviously, feeling for the staff member, I fought back a smile as my moment presented itself. Finally! A stuck-up customer that I can actually insult without the rusk of unemployment. As the stuck-up customer desperately tried to get the poor staff members attention like a shark after a seal, the duty manager came chasing after Great White (we’ll call her that because of her disposition and hair colour. No disrespect intended to the Great White Shark!). Great White realised she’d got the attention of a bigger fish now, so gave up the chase and simply called after the staff member as they disappeared through a staff-only door: “You horrible, horrible staff..! I’m YOUR customer! I pay your…” but before she could finish her rant someone interrupted her. Me. Fortunately for me, less so for her, Great White’s chase had ceased fire right across from me. Close enough to see the pure evil in her eyes, but not close enough that a regular speaking tone would suffice. So, at a volume just shy of hers, I responded to her jeers. “And you’re a horrible, horrible customer!”. Before Great White could conclude her insults at the staff, she stopped – entirely speechless. She looked at me like a deer in the headlights. She checking my clothing, I can only imagine to check to see if I was another staff member coming to a colleagues’ aid. To her dismay, her insults had nothing on me. I was a meer customer. Just a better one that she was. At this point, the duty manager reach Great White and tried to wave me off while calming the fishy-beast down.

Now I know what you’re all thinking. Maybe the customer was right! Maybe the staff had done something terrible. Well yes, that’s true. I don’t know the whole story. But after whitening the chase and name-calling, I doubt the staff member deserved that level of abuse. Something of that tone would probably normally be earned by tipping a can of beans over someone’s head. And there was no Heinz ketchup dripped from Great White, so I think it was a safe assumption that this was the return of the Snobby Customer.

The real story takes a bit of a boring turn here. Peace and harmony returns to the supermarket, but justice was not served. Good did not overcome evil. Instead, a feeble resignation from the staff left the dark-side winning once more. Why? Because the ‘customer is always right’. Well, with 8 years of supermarket experience, I can categorically state that the customer, in fact, is not always right. Especially when they act like a five year old who couldn’t get a toy from, well, the supermarket. So instead of the exact reality, I’m going to finish this story how it should have ended…

Great White stared back at me with eyes darker than the night sky. No twinkle, no glimmer of hope – just the red of the cheeks as she slowly changed her direction to face me. “Don’t you know who I am?” She groaned with a sith-like hiss. “You’re a horrible, horrible customer. I just told you. Do you need a hearing aid?” I replied calmly. Suddenly, her stance changed to that of attack and without reason or logic, she tilted her head back further so that her nose aligned with the daylight. “I am Snooty McSnooter, of the McSnooter family. Our ancestors have trampled on staff since the days of the plague. And no-one. NO ONE. Will stop me feeling better than shop staff. NO ONE.” She roared. I smiled and elbowed the customer next to me and joked, “Except me, right?”. The customer distanced themselves from me as they turned away in fear from McSnooter.

I looked above me and was reminded where we were. Those bright produce lights that are insanely bright for no good reason hung brightly above me. I wrapped my hands in lettuce to shield the burn as I jumped up onto the pepper boxes and directed one of the spotlights towards McSnooter the Great White. As the burning light tore through the air-conditioned air, the moist lettuce let off steam causing the perfect environment for a film finale fight sequence.

Great White ripped the side off of a nearby metal display, causing the contents of the display to scatter across the floor. What I can only describe as a selection of canned fish products rolled around the shiney floor, creating highly hazardous conditions for all involved. The duty manager let out a shriek as he saw Great White pace towards me, twirling the metal display pole in her boney hands. She lunged towards the bright light, smashing the bulb and knocking others out of place. They flickered on and off in this now-hazy and obstacle-heavy landscape. I dove out of the way and grabbed some oranges. As I throw them at Great White, much like live granades, she shook them off with what appeared to be supernatural powers. Much like the surrounding customers, it suddenly dawned on me that this was no ordinary McSnooter. This was McSnooter the Sith Lord! As she forced the propelled oranges away, her tidy facade fell away as her true identity was revealed.

I pulled out a shelving unit for self defence as she threw her pole wielding arm towards my head. My shelving pole met hers in an almighty crash and we battled for 20 to 30 seconds. I slowly forced her towards the freezer beds, where one had been left open. Some fancy footwork from a member of staff positioned a few of the rolling cans behind McSnooter as she unwittingly backed towards the freezer. With a final swing I smashed her now-red shelving pole aside as she fell backwards on the cans and into the freezer. I quickly slammed the lid shut before she could fully appreciate what had happened, I had jammed the catch with a newly cucumber. McSnooter struggled as she looked around her. She screamed – “Nooooo!! Basic frozen food!! This is SO below me!!!” I threw my shelving pole aside and looked back as I made my way to the checkout. I smiled at the already-cold McSnooter nose pressed up against the glass and quipped: “Chill out, troublemaker.”

The staff cheered and offered me my shopping for free. Rumour has it that the McSnooter freezer was carted out to the back of the warehouse and left there, where she remains frozen to this day with a plaque beneath it that reads: “Justice for all the customers who are jerks.”

And they all lived happily ever after. The. End.