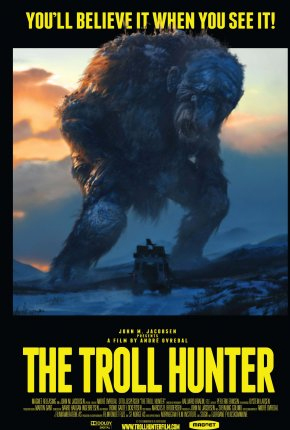 This is a good film. I confess, I saw the trailer and was intrigued. There was something odd about this trailer and I couldn’t quite put my finger on it.

Intrigue getting the better of me, I made it a priority on release day. And if, like me, you did no research into this film – the first thing that will smack you in the face: this is a subtitled film. Originally called “Trolljegeren” in its original Norwegian release, it’s been subtitled and re-branded for international release.

The second observation that I made whilst watching this film was the similarities between this film and the concept of Apollo 18. Both directed by foreign directors, both using the concept that the film has been made from footage that has been “discovered” revealing interesting truths and conspiracies. Very interesting. I guess it is the cheapest and easiest way to create movies. Though, to be fair, the graphics in this film were really good.

The general feel of this film was really good. Even the foreign language didn’t put me off. I felt involved in the film and was genuinely excited about what was going to happen next.

I did feel there was a lull in the film between the first Troll “encounter” and the mine-scene. Post mine scene, the action is pretty consistent, but I did feel the film could have shaved about 20 – 30mins off the middle, where perhaps they could have added something a little more exciting in there.

The Polish-English-Speaking characters towards the start are amazing and speak the only English lines in the film. Which also double as the most hilarious lines:
“Why problem make, when you know problem have you don’t want to make!”
Sound confusing? Now imagine it with a thick Polish accent. Love it.

Great use of Troll mythology throughout. From under bridges to daylight turning them to stone. Well researched and thought out.

Not entirely sure why this film was a 15, perhaps the use of dead animals or “Christian” blood to attract the Trolls. Either way, I would say it is a good laugh and surprisingly entertaining for a 1hr 40 mock-doc. Just don’t be expecting it to be in English! The Troll Hunter 3 out of 5. Well played.