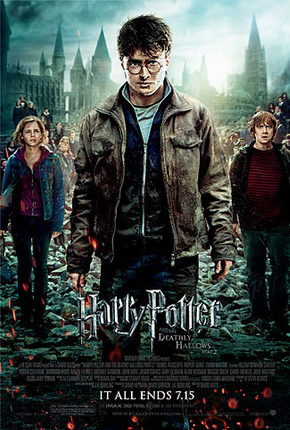 Ok, I’ll admit I’m a little slow on the uptake when it comes to this particular franchise. Having not watched the majority of the series, perhaps my take on this film does fall into the slightly biased stage – but I have to say I thought this film was mildly disappointing. I’m sorry to all those HP fans out there, but based on the trailer (which was the reason I went to see it), this film looked like an epic battle. It wasn’t. In fact the trailer showed us all the good bits, leaving me in the cinema checking my watch towards the end.

It’s not that the story wasn’t good, to be honest I though the plot was reasonably solid. How the producers thought they could successfully split the last book into two films, I don’t know. It simply resulted in two films that were filled with so much space that the characters didn’t know what to do with themselves. I think Harry could have taken a Summer holiday in the middle and nothing would have changed by the time he got back.

The graphics were notably good, I must point out, certain parts (I’ll add no spoilers) really brought the story to life well and the acting was a lot better than the previous film(s) I’d seen. But frankly, I expected a lot more for a finale to an eight-film franchise. I wish they had spent a little less time worrying about which scenes could be 3D and a little more time thinking about how to make the film a bit faster paced.

If you loved all the other films, you are likely to like this one. And if you are a major fan, you will probably appreciate the fact that it’s a Harry Potter film and therefore it’s already a success of those people. But if you are looking for an epic conclusion, or if you thought Deathly Hallows Part 1 was slow – this film really isn’t going to live up to hype for you, I’m sorry to say. Let’s just hope that The Hobbit (the next big fantasy film that I can think of) makes up for the lacking of adventure or ambition in this one.