I’m writing this with bleary eyes and a heavy head 11 hours after the 2010 UK election polling stations closed. But, with a heavy guitar riff to accompany it – “I’m feeling good…”

Did I plan to write about this? No. Is this anything to do with my continuing story blog “A Story Of Colour”, no (find the latest one, green, here). But if it were to be positioned somewhere amongst the chapters – it would probably fit between chapters 4 and 5. But enough about the sideline issues – I want to talk about the election. 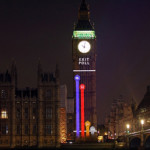 I think one of the most exciting things about this year’s election is something that all the media has completely missed. In fact I think they are knocking it rather than supporting it. It’s not that the green party got an MP in Brighton. It’s not that it’s an election that is like none other of late. It’s not even the fact that no matter how hard they try, Lib Debs seem to flunk it year after year. It’s something far more solid and factual.

As of 10am on the 7th May 2010, the votes have been more or less completely counted up and the final result of the votes have concluded a “hung parliament”. In less execution-method terms, there’s no majority in the Houses of Parliament, everything is too split up. The debate now rages, should Gordon Brown (the current PM) merge with other parties at an attempt to create a majority in the Houses of Parliament – or is that just wrong? I get the impression the media wants us to think it is wrong. I don’t like that the media tries to sway us but that’s not what this is about. But as Labour look closely at the numbers, much like every party, they are completely blind to the fundamental victory of this election.

Everyone is now looking closely at the numbers and the constituencies. Amazingly, that is exactly where the victory of this election was won. Not with the potential country leaders, the MP’s or the parties. But the true winners of this election have been the people. Let me go explain.

One of the guests on the BBC election show commented on how the results reflected that of the provisional polls made before all the marketing took place. They basically claimed that the television debates and other media in this election was pointless. I beg to differ. Maybe the final result may have been the same, I’m not questioning that. I am questioning her quote that “the media in this election was meaningless”. 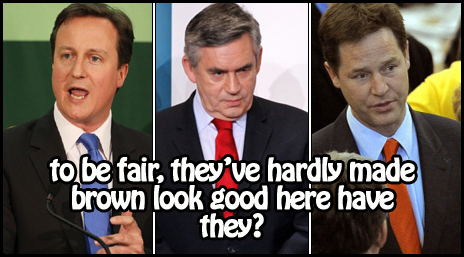 I know for a fact that precious little of the media that was harnessed to promote this election was unbiased. Most of them were outright obvious who they were promoting, some were more subtle, and while I don’t appreciate that (I am going somewhere with this) – there was point to their presence. Youtube debates, BBC, ITV and Radio debates, online polling, celebrity blogging, websites with social networking – they all played vital roles in this election whether the polls show it or not. But the truth is that they do. People just glazed over it.

The 2010 election brought brand new problems to the voting system. They simply couldn’t handle the amount of people voting. In Hackney, the police were called to calm to people who were turned away from voting. Maybe people left it too late in the day to vote – but maybe, just maybe, it’s worth considering that’s how people work in today’s life. They are busy people. Heaven knows I had to squeeze time out of my day to vote and I’m self-employed. Surely, people who work and study will have found it hard to find time to vote. But the bit that gets me jumping in my seat with glee is that they did take out the time to vote.

Students were slated for “not bringing ballet papers with them” which allegedly “slowed the process down…” Forget that! They clearly have never voted before then – so SURELY that’s fantastic news. That students and young people are getting involved with the future of the country.

The victory is clear to me. The younger generations have joined the debates this year. They want a say in their country. And to me, that speaks of national unity (ironically) through all the divisions of what to vote. No longer is the issue whether or not the average 18 year old can be bothered to vote, but is now how to deal with the overwhelming increase in the amount of people going to polling stations. Good problem to have, I say.

For the people who got turned away, I have sympathy. And I think things need to be reviewed, but I will say this: “Don’t be discouraged to vote!” If anything, let this be an increase in the value of a vote. Maybe when the electoral system gets considered (if it gets re-considered), we should consider giving a day to voting over working. Either way, an increase in votes gladdens me.

I could write forever about how exciting it is that this is taking place. I could write even longer as to why young people previously couldn’t be bothered to vote. But, instead, I will close on this note.

If you voted, for whoever or whichever party, then well done you.

Thank-you to everyone who voted. You did your country proud.

PS, I’m not lightening the fact that the eventual result is an important one, but until we know which way the national government will swing – let’s be happy with the silver lining that certainly made me smile.