So many topics. Only one entry. How do I prioritise on this thing!? Well, safe to say, there is a juicy supermarket-themed blog post saved nicely in my drafts folder that gets added to everytime I get a minute. Thing is, it’s taking longer than I thought coz it has to be good. With that it mind, I though for all two of my fans out there, I should post a little something to let you know – I haven’t forgotten the world of blogging. and without diverting too much attention away from the draft and onto this post, I thought I would post a little true story that went up of Facetube during my final weeks at Sainsco’s. This one is really true….

Ok so it’s not often that I get to write about my experiences in Sainsbury’s with it actually being interesting… unless I have somehow added a little spice and love to the mixture. But today proved to have a good enough balance of all the right pieces to form a perfect story… so here we go.

I could talk about the manager that doesn’t actually like people. I could talk about the hours I never got. I could resolve the story that was once started in the Supermarket Chronicles all those years ago. I could even write about my incredibly eventful process of handing in my resignation. But I won’t. Simply because there was something just as exciting that took place in my half an hour break over lunch.

It seemed pretty peaceful. The sun was brightening up the sky and warming up the ground. The clouds were out so it wasn’t too bright and the wind was no-where to be seen. I only had a thirty minute break, unlike vince and luke who had already had the first part of their hour-long break. But the action didn’t really start ticking over until I got there… I mean obviously, coz i couldn’t write about what i didn’t see… 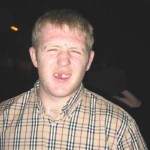 No sooner had a taken the crust of my bread baton and was devouring the fleshy part of loaf that we all love… Than something appeared on the horizon. It seemed a lot like a spot or smudge on the perfect scenario. He was on a bike. Pedaling hard and going slow. He was young, moody, chavvy and in one word, Wayne Rooney. Not the actual Rooney obviously. But you get the idea. As he neared our peaceful area, he gave us the chavvy look. The one that says “I’m amazing and what ‘you looking at?” So Luke, in his normal style, gave Wayne the thumbs up. Big mistake? Possibly, or better yet, something that would provide material for comedy moments for years to come. One of the two. The events that followed couldn’t be published word for word but lets just say he added many other words to the following words: face, smash, up, bring it… I think you get the picture.

We don’t start fights, or encourage them, but in this scenario there was three of us – one of him and he wanted some lair… So the words “come on then” came from one of us three. I couldn’t remember which of us, but whoever said it, the same result would have ensured. Like every chav on their lonesome, his chubby little legs pedaled that extra bit faster to flee from us utterly harmless boys. He muttered his chavvy banter as he left us rolling around in fits of laughter. Already this was turning into the most memorable lunch break of all time. And I hadn’t even got onto my Special K bar.

The next event would shape lunch breaks forever. Nothing could top it. Two likely lads strolled out with at least four carrier bags full of clanging bottles of alcohol. It obviously caught our attention, as we had training drilled into us that we couldn’t sell alcohol to people looking under 25. And one of them looked about 12 (in skinhead years). We talked about it for five minutes, still weak in the laughter valves from the prior experience. We also contemplated whether they could have stole the goods. But then concluded that no-one would be STUPID enough to steal four bag-loads of booze and then walk 8 feet from the premises and promptly sit at a bench and start drinking it. Turned out they were that stupid. Suddenly we noticed the younger looking of the two bolt for the hills. He paused and waited in the far distance, the sun rays reflecting of his naked skull and chest, much like a lighthouse – but not as good-looking.

One of our security guards and the shortest of all the managers game chasing after the boys. They tried to corner off the remaining lad and accused him of theft. He claimed he lost the receipt, but in hindsight i can say he was lying (based on seeing him and the police in the managers office about 4 minutes later. Oh burn). Anyway, they called us over, and quick as me and Luke could look up, Vince had rolled up his socks and sprinted over to the fun. Now the three-person wall was attempting to block the lad from leaving as he’d done “nuffin wrong”. But they needed more assistance to stop this butch, tipsy potential thief. As the security guard clan arrived on the scene, the short manager called us, the hysterical boys, over. I say hysterical coz we were laughing our heads off. I couldn’t let this moment pass without recording it. So this story continues through the lens of my lovely little camera phone…

All this and only three weekend lunch breaks remaining at Sainsbury’s for me. Can it get any better than that? Time will tell.